Gaoqi International Airport is about 6 miles (10 km) from the center of Xiamen. Nowadays, as one of the ten busiest airports in China, it operates 71 domestic air routes to major cities in China including Beijing, Shanghai, Guangzhou, Nanjing and Chengdu. In addition, 12 international flights leave from this airport every week to some overseas cities in South Korea, Japan, America, Southeast Asia, and Europe. Modern T3 and T4 provide a comfortable airport environment. There are several airport shuttle bus routes and BRT line that commute between airport and downtown area.
Airport Services & Facilities: baggage storage, ATMs, VIP lounges, etc. 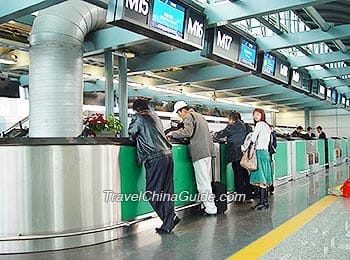 The sea route to the Taiwanese island of Kinmen is operated at Wutong Port. The ferry schedules are from 08:00-17:30 with the interval of 30 to 60 minutes. The duration is about 30 minutes. Wutong Port is located at No.2500, East Island Ring Road. Tourists can take Airport Shuttle Bus Line 3 or Sightseeing Bus Line 1 to there directly. Please make sure to come at least 20 minutes before the departure time to finish the boarding procedures.

Ferry is an excellent and convenient way to enjoy the beautiful scenery of small islets around. As the most attractive island of this city, Gulangyu has been connected with the city by ferry. Nowadays, the ferries for tourists are available at Dongdu Port and Haicang Songyu Port only in the daytime, heading to Sanqiutian Wharf and Necwo Wharf of Gulangyu. In the night time, tourists are allowed to get on board at Xiamen Ferry Dock. 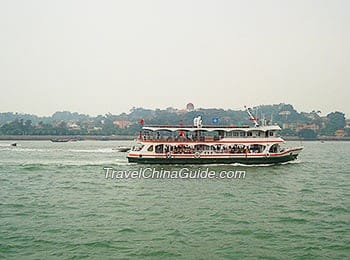 Taxi
There are over 5,000 taxis operating in the city. Grabbing a taxi is the choice of many locals and travelers, for it is more convenient and inexpensive than some popular tourist destinations. The taxi rate is as follows:

Note: Cabs running between 23:00 and 05:00 the next day would charge extra 20% for night-driving allowance. For each cab ride, CNY2 is required for the fuel charge.

Here are some cab fares for your reference if departing from the Main Railway Station:

Tips: The downtown area is not big. CNY20-25 is enough within the downtown area. There are complaint numbers attached inside the cabs. You can dial the number for a complaint if not satisfied with the service. Almost all taxis in the city are officially operated and would charge by the meter. You can ask for invoices.

Bicyle
It must be a fascinating experience to ride a bicycle along the Island Ring Road, where one can enjoy the beautiful sea scenery and the Taiwan Island across the sea. Bicycle rental services are mainly offered on the Island Ring Road. Apart from ordinary bicycles, tandem ridings or bicycle made for three persons are also available. Rental fare varies from CNY 5 to 15 per hour depending on the types of the bicycle and plus a deposit of CNY 150 to 200.

Note: 1. June to September is perhaps the most favorable season to ride around the city.